Be ye followers of me, even as I also am of Christ.

2 Now I praise you, brethren, that ye remember me in all things, and keep the ordinances, as I delivered them to you.

4 Every man praying or prophesying, having his head covered, dishonoureth his head.

5 But every woman that prayeth or prophesieth with her head uncovered dishonoureth her head: for that is even all one as if she were shaven.

6 For if the woman be not covered, let her also be shorn: but if it be a shame for a woman to be shorn or shaven, let her be covered.

7 For a man indeed ought not to cover his head, forasmuch as he is the image and glory of God: but the woman is the glory of the man.

8 For the man is not of the woman: but the woman of the man.

9 Neither was the man created for the woman; but the woman for the man.

10 For this cause ought the woman to have power on her head because of the angels.

12 For as the woman is of the man, even so is the man also by the woman; but all things of God.

13 Judge in yourselves: is it comely that a woman pray unto God uncovered?

14 Doth not even nature itself teach you, that, if a man have long hair, it is a shame unto him?

15 But if a woman have long hair, it is a glory to her: for her hair is given her for a covering.

16 But if any man seem to be contentious, we have no such custom, neither the churches of God.

17 Now in this that I declare unto you I praise you not, that ye come together not for the better, but for the worse.

18 For first of all, when ye come together in the church, I hear that there be divisions among you; and I partly believe it.

19 For there must be also heresies among you, that they which are approved may be made manifest among you.

20 When ye come together therefore into one place, this is not to eat the Lord's supper.

21 For in eating every one taketh before other his own supper: and one is hungry, and another is drunken.

22 What? have ye not houses to eat and to drink in? or despise ye the church of God, and shame them that have not? what shall I say to you? shall I praise you in this? I praise you not.

23 For I have received of the Lord that which also I delivered unto you, that the Lord Jesus the same night in which he was betrayed took bread:

24 And when he had given thanks, he brake it, and said, Take, eat: this is my body, which is broken for you: this do in remembrance of me.

25 After the same manner also he took the cup, when he had supped, saying, this cup is the new testament in my blood: this do ye, as oft as ye drink it, in remembrance of me.

26 For as often as ye eat this bread, and drink this cup, ye do shew the Lord's death till he come.

27 Wherefore whosoever shall eat this bread, and drink this cup of the Lord, unworthily, shall be guilty of the body and blood of the Lord.

28 But let a man examine himself, and so let him eat of that bread, and drink of that cup.

30 For this cause many are weak and sickly among you, and many sleep.

31 For if we would judge ourselves, we should not be judged.

32 But when we are judged, we are chastened of the Lord, that we should not be condemned with the world.

33 Wherefore, my brethren, when ye come together to eat, tarry one for another.

34 And if any man hunger, let him eat at home; that ye come not together unto condemnation. And the rest will I set in order when I come.

As Paul speaks to the issues of head coverings and the Lord's Supper, he reminds the Corinthians that all proper behavior must point back to Jesus Christ. How we worship brings honor or dishonor to God.

In the sexually charged environment of Corinth, a woman who did not cover her head was the same as a prostitute. In the context of the ancient world, Paul argues that a married woman ought to keep her head covered. This text has been interpreted many different ways throughout Christian history. Early Seventh-day Adventist pioneers argued for principles, instead of the idea that that all women should come to church with their head covered. Similarly, early leaders such as James White, objected to the idea that women should not speak in public (see his comment in Spiritual Gifts, vol. 3, pg. 24).

Paul reminds us that the emblems of the Lord's Supper are sacred, representing the broken body and spilled blood of Jesus Christ on the cross. The ordinance affirms Christ’s sacrificial atonement, and affirms our belief in the Second Advent of Jesus Christ. No wonder James White observed that the Lord’s Supper should be called the “Advent ordinance.” 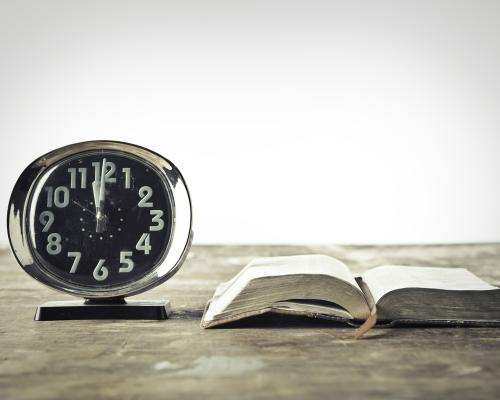 Pastor, How Long do you Pray?

Have you ever wondered this question about those in leadership? In this article, Pastor Mark Finley shares some of the ways that he’s learned to have meaningful communication with God. He also talks about how it’s not the amount of time spent in prayer, but the driving force of why you pray that makes the most difference. God isn’t calling us to be clock-watchers. He is calling us to a relationship!