Kiyong Kwon, the owner of a flourishing accounting business, is known in South Korea for leading more people to Christ than any Seventh-day Adventist.

But he almost didn’t.

The story started in late 2000 when Kiyong began to study Bible prophecy. He realized with new urgency that each prophecy in Daniel had been fulfilled except Jesus’ Second Coming. He wondered what Noah would do if he were alive today. Perhaps Noah, regardless of his career, would dedicate his life to a single mission: to proclaim Jesus’ return. Kiyong grew convinced that he should devote his life to proclaiming Jesus’ return by becoming a church planter.

One morning as he prayed, he felt God say, “Just go!” The command scared him. He began giving excuses: “I don’t have any experience. I am not a pastor. I’m already 40. I’m afraid I’ll fail.”

“But every morning God’s calling was so clear that it was painful for me,” KIyong said in an interview.

So, he prayed, “If You really want me to go, show me what to do from beginning to end. Then I’ll go.”

Kiyong prayed for seven days straight. On the seventh day, after praying, he opened Church Compass, the magazine of the Adventist Church’s Korean Union Conference. On the first page, he saw a quotation from the book Life Sketches of Ellen G. White that shocked him. It read: “God will have men who will venture anything and everything to save souls. Those who will not move until they can see every step of the way clearly before them, will not be of advantage at this time to forward the truth of God. There must be workers now who will push ahead in the dark as well as in the light, and who will hold up bravely under discouragements and disappointed hopes, and yet work on with faith, with tears and patient hope, sowing beside all waters, trusting the Lord to bring the increase. God calls for men of nerve, of hope, faith, and endurance, to work to the point” (page 213).

“That was my answer from God,” he said. “I was not supposed to pray to what to do from the beginning to the end. I had to push ahead.”

Kiyong told church leaders about his desire to plant a church, and they gave him a closed church building in the South Korean countryside. Then he announced his plans to his home church, and 20 members decided to transfer to the new church in a show of support. But Kiyong prayed, “God, I need new members.”

On the first Sabbath of the new church, 20 church members showed up to worship. And there was one young man whom nobody knew. Kiyong went over to meet the visitor.

“Why did you come to this small church?” he asked.

“I just don’t have any luck,” the young man replied. “But someone told me that if I went to a new church, it would bring me luck.”

Kiyong offered to study the Bible with him, and he became the church’s first new member.

While giving the Bible studies, Kiyong told God that he still needed more church members. One day, he prayed from morning to evening, “Please give me people. Give me souls to fill this church.”

The next morning, a neighbor stopped Kiyong as he was steering his car out of the driveway to go to work.

“Yesterday, I felt like going to church,” she said. “Please take me to your church.”

The following day, something even more surprising happened. A woman called Kiyong and said, “My sister is an Adventist who has wanted me to go to church for 10 years, but I have never gone. But now I feel like going to church.”

Kiyong studied the Bible with both women, and both were baptized.

“God sent so many people this way,” Kiyong said.

In the first year of the new church, 40 people were baptized. The number of baptisms reached 98 in 2 ½ years. Then Kiyong decided to pray for 100 new members. When he opened his eyes, he remembered a woman whom he hadn’t seen in three years. He asked around and learned that she had opened a children’s art school. He bought a bouquet of flowers and presented them to her at the school.

As they spoke, Kiyong told the woman about his church and said, “You should be that 100th person to be baptized at my church.”

“Great!” Kiyong said. “But you need Bible studies first. I’ll come to your home at 7:30 p.m. tomorrow to teach you the Bible. Make sure your husband is there!”

Kiyong mentioned the husband because he needed two people to reach 100 baptisms.

After Kiyong left, the woman called her husband and said, “Elder Kwon will come to our house tomorrow to teach us the Bible.”

Her husband, a successful business owner, worshipped idols. Recently, he had decided to improve his English and had purchased a stack of English-language books to help with his studies. One of the books was a Bible. The man had been reading the Bible in his office but was struggling to understand it. Finally, he prayed, “If You are the real God, then send me someone to teach me the Bible.”

At that moment, his wife called and announced, “Elder Kwon will come to our house tomorrow to teach us the Bible.”

The husband later said it was like a lightning bolt shot through his body. He was stunned.

The next day, Kiyong found the married couple — and their adult children — eagerly waiting for Bible studies. The family embraced everything that he taught and was baptized.

Kiyong Kwon decided that he and other church members needed to go house to house to share the gospel and fill a church that he had planted.

“House-to-house work is difficult,” Kiyong said. “Most people are not home during the day. Those who are usually don’t want to talk. But I obeyed Ellen White’s advice.”

That advice is found in Ellen White’s book Christian Service, p. 113, and reads, “Of equal importance with special public efforts is house-to-house work in the homes of the people. In large cities there are certain classes that cannot be reached by public meetings. These must be searched out as the shepherd searches for his lost sheep.”

So, every Thursday, Kiyong and other church members went from house to house. They didn’t carry religious literature or offer Bible studies. Instead, they asked, “How can we help you and your family?”

One day, Kiyong pressed many doorbells without any response. But the front door swung open at one house, and the woman standing there said, “Come in.”

Kiyong entered the house but expressed shock at the instant invitation. “Do you know who I am?” he said. “Why did you let me in?”

“I know that you are evangelizing,” she said.

“But most people reject me,” he persisted. “Why do you accept me?”

The woman explained that she had dreamed that night that a tall stranger would visit. In the dream, the tall man had opened her front door and told her, “Come out! Hurry!”

“When you pressed the door bell,” she said, “I saw you on the intercom TV screen, and you looked tall. So, I let you in.”

Kiyong, growing more surprised by the minute, asked whether he could help the woman or her family.

“My daughter is depressed,” the woman said. “She refuses to go out. Please help her.”

“Bring your daughter to the living room,” Kiyong said.

“No, my daughter refuses to come out of her room.”

“It will be different this time,” Kiyong said. “Just tell her to come out.”

Surprisingly, the daughter came to the living room, and Kiyong prayed and read the Bible with her.

He returned the next Thursday and read the Bible with her again. The daughter started attending church and was baptized.

“This has been my experience repeatedly,” Kiyong said. “It is God who does the mission. He deserves all the glory.”

Healthy Church for the Rich

Kiyong chose an affluent suburb of South Korea’s capital, Seoul, for his second church plant. His first church, opened in a rural area four years earlier, was filled to overflowing, and he wanted a challenge.

“When God first called me, I said, ‘I can’t,’” Kiyong said. “But after I witnessed God’s power, I became bolder.”

He reasoned that impoverished people can accept God more easily than the wealthy. He wondered how to share the gospel with those who have everything and decided that even the wealthy need good health. So, he opened the Bundang NEW START church and a vegetarian restaurant in an office building in the suburb of Bundang.

“I decided God’s health message is the way to share the last-day gospel,” he said.

“The woman was really shocked by what she heard, but she didn’t want to leave her Sunday church,” Kiyong said.

But the pharmacist’s mind changed as she continued to listen to the Bible studies. She began to think about keeping the Sabbath and worshipping at the NEW START church. As she pondered what to do, she began to suffer a bad headache. She worried that she might have brain cancer, but doctors couldn’t find anything wrong. Still, the pain persisted.

Finally, her 24-year-old daughter said, “Do you know why you have the headache? It’s because you know what’s right but you aren’t doing it. I’ll go to the Sabbath church with you.”

The pharmacist and her daughter showed up at church the next Sabbath, and they are faithful members today.

Kiyong, 56, has now planted three churches, and the third church opened in 2017. Church leaders said he has led more people to Christ than any other Adventist in the country. But Kiyong said he has led no one to Christ; he only obeys God’s command, “Just go!”

“Surprisingly,” he said, “I didn’t have to do anything. When God works, there are miracles.”

Kayoing Kwon says he has led no one to Christ; he only obeys God’s command, “Just go!” However, in this inspiring article from Adventist Mission, we find God has used business owner Kiyong Kwon to plant three churches already in South Korea since 2000, and the most recent church opened in 2017. Many have been led to Christ because of Kwon's faithfulness to the great commission. 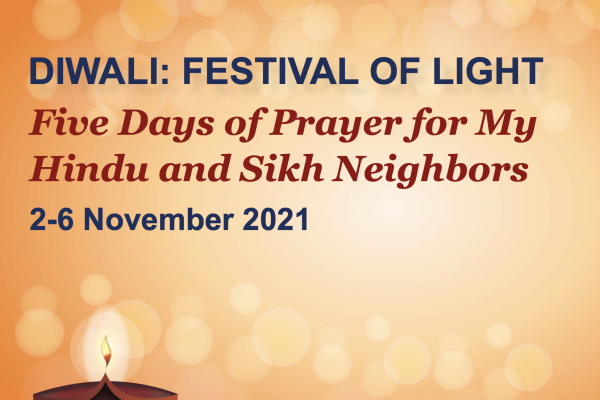 The Diwali festival of light: Five Days of Prayer for My Hindu and Sikh Neighbors

The Diwali festival of light is a sacred celebration for our Hindu and Sikh neighbors. We believe this is a wonderful opportunity for us as followers of Jesus Christ to unite in prayer that all people may come to know the True Light – Jesus – Who desires to shine His light upon everyone (John 1:9). You are invited to participate in five days of prayer, November 2-6, 2021, with the GC Global Mission Center for South Asian Religions (CSAR). During these five days, we will pray for our Hindu and Sikh neighbors in the countries of Fiji, Bali, Guyana, Mauritius, India, and around the world. 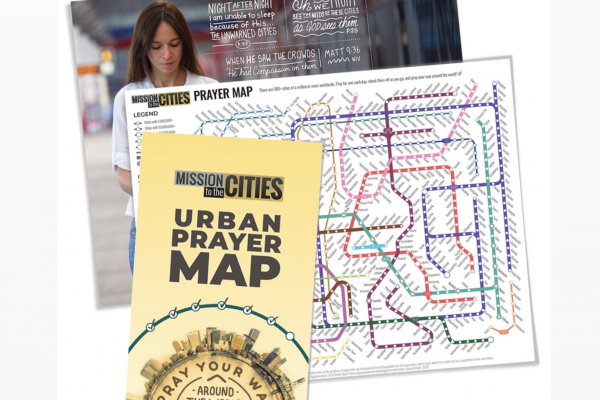 Pray Your Way Around the World!

Ready to say "I Will Go" but stuck at home in a pandemic? Now you can pray your way around the world! Each line of the prayer map represents a region of the Seventh-day Adventist Church, and each station is a city of a million or more. Pray for one city each day, check them off as you go! 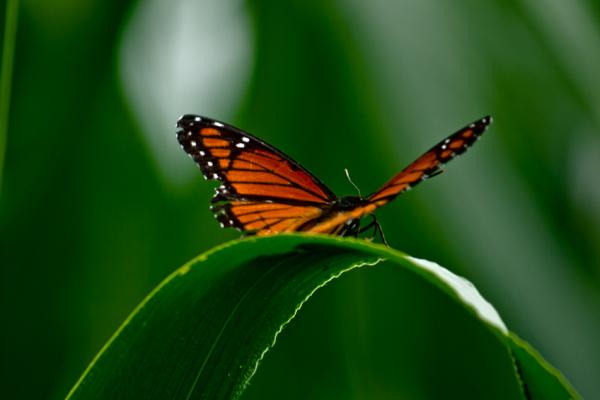 Ubake’s charming and colorful artwork helps to make the Adventist church in the Maolin valley in Tawain stand out. However, it’s not the metal, wooden, or cloth ornaments that make this church so well known in the community. It's the church's prayer ministry. Watch this short testimony and be inspired of what one small church can do!