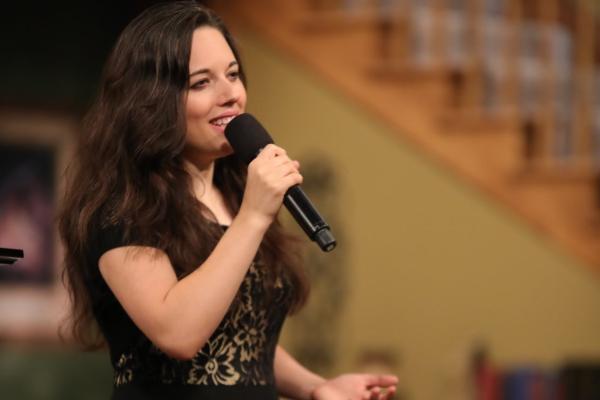 At the end of September, I was singing for a large event in Tampa, Florida. Part of the event included a health clinic that served the homeless community with free medical services, including dental and surgeries. Thousands were served in two days. It was a fantastic experience, but a few days later I ended up sick. It was not hard to understand why, considering I had been surrounded by sickness. Thankfully it did not take me long to recover, but as often happens when I get sick, I lost my voice and ended up with a lingering cough, just in time to start our fall tour.

It is never a pleasant thing to do a concert when you have absolutely no voice and even talking is a struggle. However, I have learned over the years that my ability to sing does not come from me. In fact, the strength to do everything we do comes from God, not from us. "I can do all things through Christ which strengthens me” (Philippians 4:13). That includes singing. Knowing this truth is the only thing that makes it possible for me to stand on a stage in front of a room full of people (with television cameras that are broadcasting live) and trust that God is going to get me through it. And He always does. This time though, something new happened.

It was the first concert of this month. I attempted a sound check before the concert but could not sing more than a few notes, and those notes were not on key. Ernie just kept reminding me, "Don't worry. It's not going to be you singing."

The concert started and I began to sing. A clear sound came out, but I knew my throat was still messed up. At any second, I felt like my voice would cut out. But it didn't. Suddenly, I realized that a very high, soft section was coming up, and I would need to slide up to this very high note and hit it very gently. That's not easy on a good day, but on this day, I knew it would probably be impossible. As soon as I realized I was about one line away from this section, I panicked as I thought, "There is no way on earth I'm going to be able to hit those notes! Lord, help me!"

Suddenly, my voice gave out. I was moving my mouth, but my voice had stopped working. Yet, those high notes were coming out crystal clear. I couldn’t believe it! They sounded better than I had ever sung them before. The notes flowed with an ease that I had never experienced previously with the song. The last high note was clear, soft, and perfect. But here's the miracle. You see, nothing was coming out of me. I heard the sound as if it was outside of me. Directly in front of me. Was an angel singing for me?

As soon as the high part was over, my voice kicked back in and sustained for the rest of the concert and for the next three concerts that followed.

Before every concert, I pray that it will be Christ's voice that is heard and not mine and that He will allow the angels to sing with me. I think this time, one of them might have just taken over for me mid song. God sure is good, all the time.

Laura Williams and her husband Ernie travel all over the United States putting on Christ centered musical concerts. Laura has produced multiple musical albums and CD’s. Her latest is titled Scripture Songs for the Last Days. One of our personal favorites though is her song, Just Bend Your Knees and Pray.