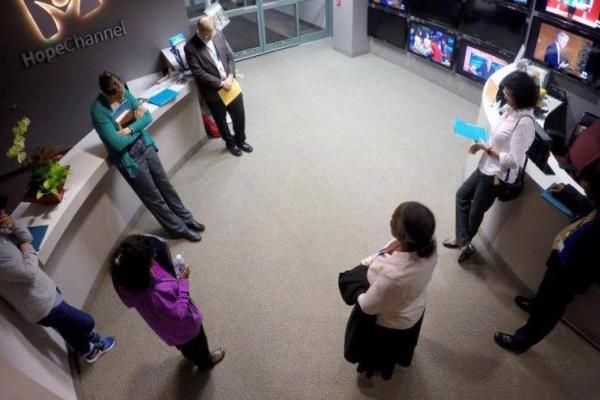 From Prayer Walking to Prayer Zooming

I still remember the first Annual Council I attended, back in 2010, and all the prayers we had that fall council. I remember watching grown men weep, as they prayed for forgiveness for their Laodicea ways, and as they pleaded for more of the Holy Spirit. One division leader told me that he had been attending meetings at the General Conference for over 15 years, but had never experienced such tangible presence of the Holy Spirit. Truly God was moving!

Thanks to the prayer leadership of our General Conference president Ted Wilson, as well as the years of prayer ministry led out by Stanley Poniah and his General Conference prayer team, and then the strong prayer emphasis by my friends and mentors in ministry, Jerry and Janet Page, God has been pressing His people into more prayer for some time now.

So we began recruiting prayer teammates to come to Silver Spring in advance of Annual Council, to pray behind the scenes on behalf of our church leaders. This started a new tradition.

Since 2012, every Annual Council, we’ve had a prayer team onsite at the General Conference church headquarters fasting and praying for 10-21 days. Although our prayer team was usually small, numbering between 5-10 individuals, we knew that our work of prayer was significant, for as we’ve heard it said, when man works, man works, but when man prays, God’ works.

Starting at 3 a.m. every morning, we would meet in the basement of the General Conference headquarters. We would take turns praying for about 15 minutes near the giant mural depicting Jesus and Christ’s followers on the narrow way. After asking God to search our hearts so no sin or compromise would hinder our prayers, we would start walking through the building praying for each department, and each staff member that worked in the General Conference building. Our prayer walk, which also included praying for all the Annual Council Executive Committee members by name, usually took about three to four hours. It was exciting hearing later how specific prayers that we had prayed during those early morning walks, God answered.

I still remember how one female member of the prayer group once paused at 3:45 a.m. during a walk-through of the church headquarters to ask that God awaken any church members who were not serving Him as they should. The woman prayed, “Please get them out of bed and on their knees right now to plead for the Holy Spirit and that they experience a deeper relationship with you.”

Later that day, I was stunned to see a personal post on one of our church websites that read: “At 3:45 a.m. this morning, I woke up and was overwhelmingly convicted that I was not walking with God as I should. I got on my knees and confessed my sins and asked for a deeper walk with God. I urge all of you to do the same.” When I saw this testimony, I realized that God was giving us a glimpse of how He is working behind the scenes.

During these past ten years, we’ve seen God work miracles in so many ways, from guidance in meetings being held, to personal healings for GC staff members or their families, to revival and Holy Spirit blessing all around the world. Most of the prayers we may not know the answers to until eternity. But whether we see answers now or not until Heaven, we will continue to pray, because we know God answers prayer!

This year, for the first time in eight years we did not have the luxury of meeting together in person at the church headquarters during Annual Council. Instead, we met by zoom. (Zoom.us is a free online video platform.) And this time, it wasn’t just a small prayer team praying before the meetings started each morning. This time hundreds of church leaders from each of the divisions and territories around the world joined together to pray each morning at 6:30 a.m. before the Annual Council meetings began. Elder Wilson helped lead these prayer times. It was beautiful. And it’s a blessing that we are going to be continuing through the coming months.

Ellen White writes, “It was because Elijah was a man of large faith that God could use him in this grave crisis in the history of Israel. As he prayed, his faith reached out and grasped the promises of Heaven, and he persevered in prayer until his petitions were answered. He did not wait for the full evidence that God had heard him, but was willing to venture all on the slightest token of divine favor. And yet what he was enabled to do under God, all may do in their sphere of activity in God’s service… Faith such as this is needed in the world today—faith that will lay hold on the promises of God’s word and refuse to let go until Heaven hears.” Prayer, p. 138

Church leaders are continuing to pray together, and we’d like to encourage you as well to take part in the blessing of daily united-prayer.

Recently a prayer movement called 24/7 United Prayer was launched with the sole purpose of providing a place where believers can meet together to pray daily on zoom. This prayer movement, led by one of the founders of our 100 Days of Prayer initiative, is endorsed and supported by the General Conference Revival and Reformation Committee. Already we’ve been hearing testimonies of all the lives that are being changed through this beautiful daily time of prayer. Revival is happening! And we don’t want anyone to miss the blessing!

The Bible tells us, “If My people who are called by My name will humble themselves, and pray and seek My face, and turn from their wicked ways, then I will hear from heaven, and will forgive their sin and heal their land” (7 Chron. 7:14).

Remember, “Prayer is a heaven-ordained means of success. Appeals, petitions, entreaties, between man and man, move men, and act as a part in controlling the affairs of nations. But prayer moves heaven” (In Heavenly Places, p. 75).

Don’t miss out on the incredible blessing of united on prayer! Even when we can’t be together in person, God’s Spirit is still being poured out, even over zoom.

Melody Mason is coordinator for United in Prayer for the General Conference.

• Pray for a peaceful resolution in the election crisis currently facing the United States.

• Pray that God’s people will also sense the great need to spend more time in prayer. “Prayer is a heaven-ordained means of success. Appeals, petitions, entreaties, between man and man, move men and act a part in controlling the affairs of nations. But prayer moves heaven.” (In Heavenly Places, p. 75)

• Pray for church members affected by the recent hurricanes and typhoons.

• Pray for this week’s Adventist Mission unreached people group, the Uzbeks. The Northern Uzbeks live in Central Asia. There are more than 25 million Uzbeks and 0.01% follow Jesus. We invite you to specifically pray for the younger Uzbeks who are searching for spiritual truth. May they find the water of life, and may it flow through God's power to their families, friends, and communities.