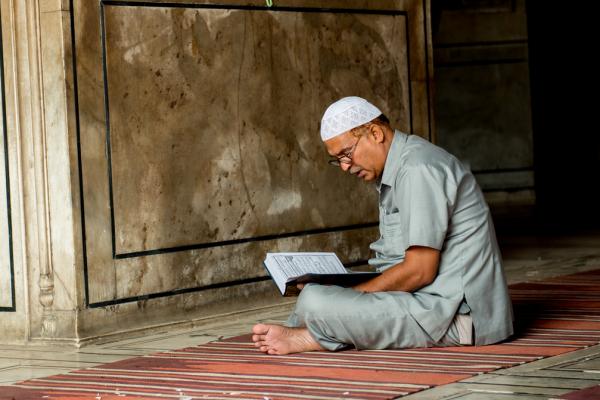 In the Name of Jesus

by Tentmakers from the Middle East and North Africa Union

When we arrived in the city where we currently live, we only knew one other Adventist living there: a lady married to an indigenous Muslim. In time, she shared stories with us of the many times she had tried to talk to her husband about Jesus and the Bible, and about the problems it created. He was not interested or open to hearing anything about her faith or her “Book,” the Bible.

We met him several times. We went to picnics together, went fishing, and spent a weekend at their house. They came to ours another weekend. As time passed, we developed a good friendship.

He accepted an invitation to come to some worships that we prepared, but during the program, he constantly looked at his cell phone or did other things to show that he was not interested in the message. As soon as the worship was finished, he became talkative and friendly again.

We continued praying for him and spending time together as friends. With time, he became more and more open to us and our group.

One day his child prayed in front of him, but for the first time, she closed the prayer by saying, “in the name of Jesus, amen.” The husband became so angry that he stood up and began yelling at his child and wife. He said that it was wrong and that she should never pray in the name of Jesus again.

He went out of the room, and his wife was very sad and discouraged. She started to pray. Of course, she had been praying for years, but that specific moment she again told God how difficult it was for her to raise a child while married to a Muslim husband who would not even allow her child to pray in the name of Jesus. She asked for wisdom and patience.

After a while when her husband was calm again, she asked him to get his Quran for them to read together. When he brought it, she went verse by verse through every passage that mentions that Jesus is alive in heaven at the side of Allah. By the end, she said, “Do you see it? There is nothing wrong with our child praying in the name of Jesus.”

He was caught by surprise as he had never read those verses, and he had no answer for them. After a few seconds of silence, he replied, “OK, she can pray in the name of Jesus, but He is not God!” His wife was so happy. She thought silently to herself: “That will be a whole other conversation. We will get there.”

After a while they became friends with another couple. The wife was foreign with Christian background, and the husband was a local Muslim. One day this couple invited them over for a meal. While there the Adventist wife overheard the husbands’ conversation. The Muslim host asked her husband what their religion was. Imagine her surprise when her husband replied, “We’re Adventist!” She could hardly believe that her Muslim husband introduced himself as an Adventist.

Not long after they once again accepted our invitation to come to our home for a special worship. It was the beginning of the New Year. Since all of us were praying, we decided that it would be best to talk about prayer and how God answers prayer. We encouraged everyone during the worship to recall what prayer requests we had prayed for as a group that God had answered.

As we started to compile a list, the husband got excited and started to mention all the blessings he had received as a result of the group's prayers. He remembered that his parents were sick, and after the group’s prayers, they recovered. There were other answered prayers as well. At the end, we all prayed together and thanked God for the many blessings, and he eagerly participated.

A few days later, the couple ran into serious financial hardship and other problems. Once more the Adventist wife was surprised when the husband joined her for prayer, and since that day, they have been praying every single day together, holding each other’s hands (which had been her dream for so many years), and their child always closes the prayer by saying, “in the name of Jesus, amen.”

In his own personal prayers, the husband now gives his troubles to the Lord. He has been encouraging his family in another city, talking by phone and telling them to trust their struggles to God—that God will be faithful to help them.

*Since we first shared this testimony, this man has been baptized, and is continuing to grow. It is an awesome privilege to watch this transformation take place before our very eyes.

This story comes from the Middle East and North Africa Union. Authorship, names and locations are not shared for safety reasons.

Download this week's blog and prayer requests by clicking here!

• PRAYER REQUEST: Pray for the General Conference session that will be occurring one year from now, June 25th – July 4, 2020. Pray that God would prepare His church and leaders for the Holy Spirit outpouring to come. (Many are joining together for a year in prayer, in advance of the GC session. To be a part of this group, visit: www.revivalplan.com.)

• PRAYER REQUEST: The World Church third quarter Day of Prayer and Fasting is scheduled this coming Sabbath, July 6, 2019. The theme is “World-Changing Prayer Warriors: Prayers that Change People.” Pray that many will discover the joy of being a prayer warrior for the Lord. (For more information, visit: https://www.revivalandreformation.org/resources/all/prayer-and-fasting-days)

• PRAYER REQUEST: Pray for ADRA Colombia, and the Adventist churches in Bucaramanga and Medellin, Colombia, as they seek to help Venezuelan refugees who have migrated to escape instability at home. Pray that God would give peace and courage to the many believers trapped in difficult living conditions in Venezuela.

• PRAYER REQUEST: Pray for church members in Mostar, Bosnia and Herzegovina as they seek to reach that city through health ministry. Pray that God brings people to their doors.

• PRAYER REQUEST: Pray that God will pour out an extra measure of the Holy Spirit upon your local church. Pray that He will work in such a way that members will experience deeper revival in their walk with God, and that they will desire to engage in active ministry.

• PRAYER REQUEST: Continue to pray especially for an extra measure of the Holy Spirit to be upon your local pastor. Pray for his marriage, his family, his children, and his many duties. Pray that God would put a special hedge of protection around his life and ministry.