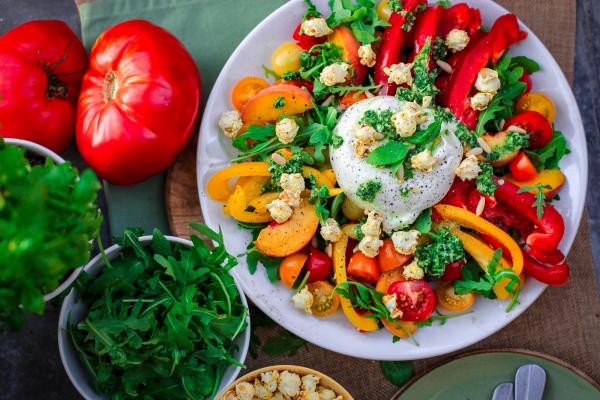 Join Us for Ten Days of Abundant Blessings

Daniel and his friends had undoubtedly been living peacefully in Jerusalem when suddenly their world forever changed.

The year was 605 B.C. and the forces of the Babylonian King Nebuchadnezzar had invaded the southern kingdom of Judah, overcoming King Jehoiakim. As a result, Daniel and his friends were taken captive together with other strong and talented young people from Jerusalem.

From all appearances, the world had ended for them. Like many other captives, they were probably asking God: “Why has this happened? What will become of our future?”

Things looked bleak indeed. Rather than being cast into prison or assigned to some forced labor camp, however, Daniel and his friends found themselves placed among the favored of Nebuchadnezzar, with the king’s royal meat and dainties to eat, as well as his own wine to drink. The king expected the Hebrew captives to embrace these privileges gladly. All did — all, that is, except for Daniel and his three friends Hananiah, Mishael, and Azariah.

The Bible tells us: “But Daniel purposed in his heart that he would not defile himself with the portion of the king’s delicacies, nor with the wine which he drank; therefore he requested of the chief of the eunuchs that he might not defile himself” (Daniel 1:8).

At Daniel’s insistence, Prince Melzar, the eunuch in charge of those selected for the king’s service, agreed to give Daniel and his three friends a 10-day test, even though it might cost him his life. The test sought to find out what would happen if the four young men ate only vegetables and drank only water. You can imagine that Daniel and his friends prayed earnestly during those 10 days. God heard their cries.

The Bible tells us, “And at the end of 10 days their features appeared better and fatter in flesh than all the young men who ate the portion of the king’s delicacies” (Daniel 1:15).

Not only were they noticeably healthier than the others, but the Bible goes on to say that as they continued to honor God, they increased in wisdom and knowledge, and when finally brought before the king for testing, were found to be 10 times wiser than all the king’s worldly astrologers and wise men (see Daniel 1:17-20).

Would you and I be faithful like Daniel if put to such a test today?

The sad reality is that we have already been taken captive. We actually live in a world that has been under Babylonian siege — that of Satan — for more than 60 centuries. As a result, we are dealing with the ravages of war on all sides, even in the church: failed marriages, broken homes, lost children, declining health, spiritual compromise and apathy, heartbreak, and much more. Yet our case is not hopeless, for we serve a mighty God who is even now able to take what the enemy has meant for evil and turn it to good for His glory. See Genesis 50:20.

Imagine if we, like Daniel and his friends, stood up and said: “I don’t want to accept the status quo anymore. I want to prove God. I want to test His Word. I want to be faithful so that He can use me for His glory.”

Over the past few years, I’ve made it a habit to start every January with a time of fasting and prayer to help grow my walk with God. Fasting may included any number of things, whether abstaining from certain foods, or turning off social media accounts. As my friend Derek Morris likes to say, “We fast from the world so we can feast on Jesus.” As I dedicate extra time to prayer and Bible study, I find my soul refreshed and rejuvenated. I also have seen many amazing miracles and answers to prayer.

On January 8, the Seventh-day Adventist World Church is starting the official Ten Days of Prayer, which runs through January 18. If your church is involved, I encourage you to take part whole-heartedly and watch how God blesses abundantly during these 10 days as you come together in seeking Him. If your church is not involved, don’t despair! You can still take part in the blessing, alone or with just a couple of friends or family members. No matter how you participate, the most important thing is that you don’t miss the blessing.

The Bible tells us, “Open your mouth wide, and I will fill it” (Psalm 81:10). If you are spiritually hungry, join us for 10 days of prayer. I guarantee your life will never be the same.

Melody Mason is coordinator of United in Prayer and works with Revival and Reformation ministries at the General Conference.

• PRAYER REQUEST: Please pray for your local young people both in and out of the Church, that God will draw their hearts to Him in a special way this coming year. Pray for wisdom to reach out to them. The enemy is working hard to capture the hearts of our children. We need to fight for them on our knees. Pray for these young people by name.

• PRAYER REQUEST: Please pray for the struggling marriages within your church. Pray for God to mend the wounds and bring healing and unity. Pray that the enemy will not be successful in breaking apart the homes in your local church.

• PRAYER REQUEST: Pray for church members who live alone, whether as divorcees, widows/widowers, singles or because of some other circumstance. Pray that God would take away the loneliness and pain that so often knocks at the door and fill hearts with His joy.

• PRAYER REQUEST: Pray especially for the leaders of your church—your pastor (including his family), your local elders, deacons, deaconesses, etc. Pray that God would give them a renewed vision and passion for service as they start this New Year. Pray that God would bring a fresh personal revival to their life and ministry.

• PRAYER REQUEST: Last but not least, let’s keep praying for the Holy Spirit to be poured out during the coming Ten Days of Prayer, January 8-18, 2020. Please pray earnestly that many people all over the world will choose to be part of this powerful Ten Days of Prayer focusing on cultivating a deeper experience with the Lord. To learn more, visit: www.tendaysofprayer.org.