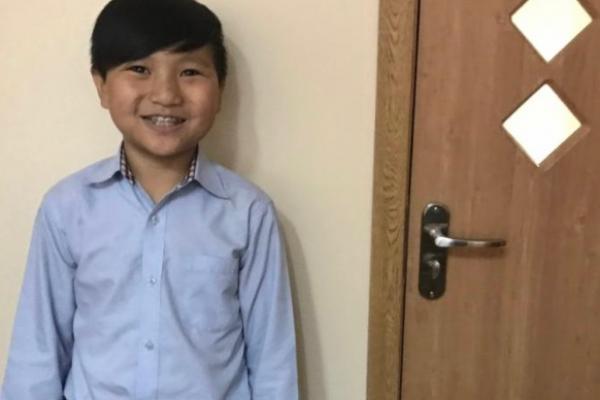 When Iveel Namjildorj was 5 years old, he moved from his home in Mongolia to the Philippines. His father, a Seventh-day Adventist pastor, needed to further his pastoral studies at an Adventist university in the Philippines, and he took the family with him. Iveel also needed to study, so his parents enrolled him in first grade.

School turned out to be difficult for Iveel, who didn’t speak English and struggled to communicate in class. After school, the other boys teased him as he waited for his ride home.

“You can’t do anything,” one boy said.

“You can’t even write,” said another boy. “Go to kindergarten.”

When he heard these hurtful words, Iveel ran back into the school and hid behind the door of his classroom. He didn’t want to cry in front of the other children.

When he returned home every day, his mother asked him, “How was school?”

Iveel didn’t want his mother to worry, so he didn’t tell the truth.

“School was good,” he said.

At night, when Iveel went to bed, he wanted to kneel and pray to God for help at school. But he was afraid that if his mother saw him praying, she would ask him what he was praying about. He didn’t want her to worry. So, he woke up in the middle of the night, when his parents were sound asleep, and quietly prayed to God.

“Please let the children be nice to me so we can be friends,” he said. “And please let me go to another school.”

Iveel prayed nearly every night for several months. Then his parents suddenly decided to send him to a different school. The children at the new school were kind, and they helped Iveel learn to speak English. When he injured his leg playing soccer, the other boys helped him walk home.

Iveel said in an interview that he was so happy that God had answered his prayer about going to a new school.

Then one day, the principal of Iveel’s old school invited him to return for a party. Iveel felt a little nervous about seeing his old classmates who had treated him unkindly. But when he went to the party, the other children played with him and he had a great time. He said God answered his other prayer about becoming friends with those children.

Iveel is now in the fifth grade, and he goes to the only Adventist grade school in his home country of Mongolia. But he has never forgotten how God answered his prayers. He had never asked God for anything before he had prayed about his school trouble, and he had even wondered whether God really exists.

“Yes, I went to church every Sabbath, but I thought, ‘How can God create the world with just His words?’” Iveel said. “After God answered my prayers, I believed that He is real.”

BRIEF FACTS ABOUT THE NSD: The Northern Asia-Pacific Division (NSD) comprises China, Mongolia, Japan, Taiwan, North Korea and South Korea. It is the most populated division in the world, with about 1.6 billion people living in this region. Of the population, about 3 percent are Christian. The other 97 percent are Buddhists, Shintoists, Muslims, Shamans and Atheists. The Adventist church membership in the NSD is about 700,000. The ratio of Adventist to the general population is 1 to 2,200. This broad territory presents substantial mission challenges.

PRAYER REQUEST: Pray that leaders and church members will work together to spread the Three Angels’ Messages to millions of unreached people in this territory.

PRAYER REQUEST: Please pray that church members will have courage to stand strong for their faith, despite the persecution that they often face from family, friends, or even the government in certain regions.

PRAYER REQUEST: Pray for the Holy Spirit to be poured out, and doors to open into previously un-entered dark territories, such as North Korea.

PRAYER REQUEST: Pray for the youth to catch the fire of evangelism, and for the evangelistic thrust scheduled for Japan in 2018.