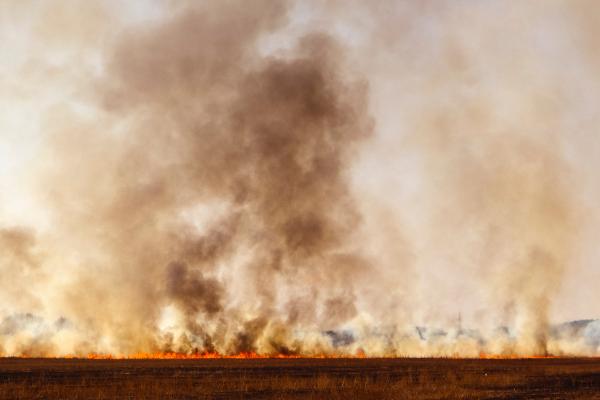 The Wind Blew, but the Fire Stood Still!

Making lunch took some work for Alejandro Gonzales Qquerar, a farmer and father of four children in Peru.

First, he needed to dig a hole in the ground. Then he would place wood and stones into the hole and light a fire. When the flames caused the stones to turn red and then black, he would throw some potatoes on top of them. After that, he would cover the potatoes with dirt and cold rocks, which would put out the fire. The potatoes would bake in the hot earth and, after about 20 minutes, they would be ready to eat.

Alejandro got to work, digging the hole in a small clearing in his field of barley. The crop was dry and nearly ready to harvest. Alejandro placed the wood and stones into the hole and lit the fire.

As the fire slowly grew in the hole, the wind caught hold of a spark and blew it over to the barley field. The dry stalks quickly ignited and the flames, fueled by the wind, raced across the field and entered a neighbor’s barley field. Several other neighbors also had fields nearby.

Alejandro helplessly watched in horror. His raw potatoes lie forgotten at his feet. The wind blew harder, and he had to put his hand to his head to keep his hat from flying off. The fire was out of control, and he couldn’t stop it.

He fell onto his knees and took of his hat. “God, what are you doing now?” he cried out. “If all the crops burn, I don’t have the money to reimburse my neighbors. Please perform a miracle and put out the fire. Amen.”

He stood up and looked at the fire. Then he looked again. It was still burning, but it wasn’t moving. The wind was still blowing hard, but the flames were standing still, as if stopped by an invisible wall.

Alejandro couldn’t believe his eyes. “It’s a miracle!” he exclaimed. “Thank you, God!”

He raced to his neighbors’ houses to alert them about the fire and to seek their help. He didn’t want them to come out to the field and wonder what had happened.

The neighbors came running, and they converged on the field. By this time, the fire had nearly burned itself out. It hadn’t spread any farther after Alejandro’s prayer. Alejandro and the neighbors threw some dirt on the last flames to put them out.

One neighbor was furious and wanted to hit Alejandro. But the others said, “This is a miracle. The fire would have spread and destroyed all of our crops if it hadn’t stopped here.”

In the end, Alejandro determined that the fire had damaged his crop and the crops of three neighbors, destroying about 650 pounds (300 kilograms) of barley. After he harvested the remainder of his barley, he reimbursed his neighbors for what they had lost.

“God stopped the fire because I believed in His power,” Alejandro said. “I asked for a miracle in my prayer, and God gave me a miracle. God has done many miracles in my life.”

One of the biggest miracles in Alejandro’s life is that God has helped him lead 800 people to Christ and baptism. Even though he is a simple farmer who never studied beyond the first grade, he gives Bible studies and has opened six Seventh-day Adventist churches in the region around his village, Ccacaccollo.

• PRAYER REQUEST: Pray for the Total Member Involvement events coming to a close in the Philippines. Pray that many decisions will be made for the Kingdom.

• PRAYER REQUEST: The 10/40 window is home to 236 cities of a million or more residents. Please pray for committed missionaries to be willing to minister to the unreached people of these cities.

• PRAYER REQUEST: Pray for the Middle East and North Africa Union (MENAU), and the cities that have no Adventist presence—that God will raise up laborers for the harvest. There are 48 cities of 1 million or more people in this territory alone, some of which have never had a Seventh-day Adventist set foot in them.

• PRAYER REQUEST: Please pray for the church members in the MENAU to have courage as they often feel alone and isolated. Religious persecution is rampant in many areas.

• PRAYER REQUEST: Please pray for God’s Spirit to be poured out on members in the Euro-Asia Division as they seek to share their faith. Mikhail F. Kaminsky, president of the Euro-Asia Division, shares that despite having a lot of tools for reaching cities, the work in the region of the former Soviet Union remains extremely challenging.

• PRAYER REQUEST: Please pray that God would bless even now in the logistical planning for the General Conference Session of 2020.