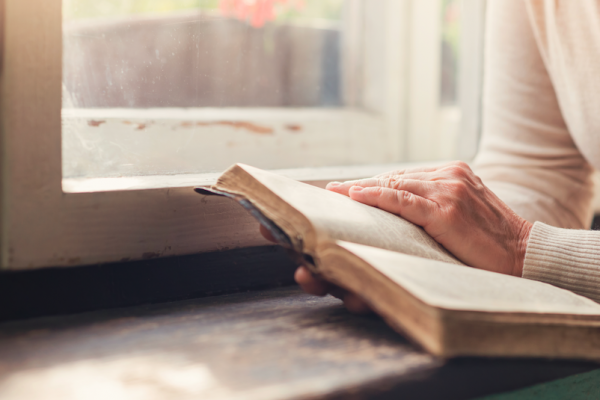 "You Must Have the True Original Bible!"

By a Tentmaker in the Middle East

Laura understood her mission as a tentmaker even as she began the preliminary language learning program in the Middle Eastern country where she was serving. It didn’t take Laura very long to make new friends. Outgoing by nature, she soon became involved various opportunities to interact with all kinds of people, each in different stages of life, with different needs. Laura discovered that some of her new friends were skeptical, some were silently questioning, and others simply wanted to know the truth.

Soon after arriving in the country, she befriended two sisters. God opened doors for her to have many spiritual conversations with them. Their grandmother was a devout and learned Muslim and one day they called her to get information to refute Laura’s claims about Christianity and Islam. “Imagine how their skepticism turned into surprise when their grandmother backed up almost everything I had shared about the Bible,” says Laura.

At the same time, Laura began to make friends with her Arabic teacher. They cooked, laughed, and went on several field trips together. Because of the language barrier and her quiet personality, however, spiritual discussions began a little more slowly. As the two began to read Bible stories, the teacher noticed how passionate Laura was about her faith. She began to ask questions and quietly revealed that she had lost faith in Islam.

Laura started sharing favorite Bible passages with the teacher, gave her a Bible, a copy of The Desire of Ages, and other inspirational reading material that she knew would be a blessing. The teacher was overjoyed. Recently they began discussing the sacrifice of Jesus Christ. At first the teacher declared, “All you Christians believe that Jesus Christ sacrificed for you.” However, one day the teacher acknowledged that Jesus “sacrificed Himself for us,” a small declaration that did not go unnoticed.

Laura also became very close to a blind girl. Her blind friend often pestered Laura to join her while she smoked shisha (tobacco). Laura took this opportunity to share about the importance of caring for the body and maintaining good health. One day, while talking about shisha (smoking) and healthy living, the girl suddenly asked Laura about Jesus.

Laura took her on a journey that began with the fall of Adam and Eve, ending with the death and resurrection of Jesus. Her response was instant. “You mean He died and then He rose from the dead? But the Qu’ran says. . .” Laura spent a long time questioning her about the Qu’ran’s theories until eventually the contradictory statements became clear. She admitted that she had never thought about these things; she just wanted to know the truth. Laura had the privilege of teaching her how to pray and asking God to help her come to an understanding of the truth.

Laura is still praying for her two friends, hoping that time will unfold their interest and confidence in the Scriptures and that they will be open to studying what the Bible says. She also prays for the Arabic teacher and her continued interest in the Bible. She prays that God will reveal more and more truth to her blind friend. Please pray for all the tentmakers like Laura who are working faithfully for the Lord in countries all over the Middle East and North Africa.

Due to safety issues, no names can be shared. Please pray for the work in the Middle East and North Africa Union.

• PRAYER REQUEST: Please pray for the upcoming Impact Europe: Global Youth Leadership Conference taking place in Kassel, Germany, July 31 to August 4th. The conference is intended to equip, empower, and engage a generation of Spirit-filled leaders to pass on the legacy of the reformation. Pray for the Holy Spirit to work in a mighty way during this event.

• PRAYER REQUEST: Please pray for the upcoming ASI (Adventist-laymen's Services and Industries) International convention that will be taking place in Orlando, Florida, August 1-5. Pray for these supporting ministries of the Seventh-day Adventist Church, and their ministry leaders, that God will continue to use them in a mighty way for the furtherance of His Kingdom.

• PRAYER REQUEST: Please pray for our young people as many of them are preparing to begin yet another school year. Pray for these young people to fall in love with Jesus and recognize the significance of their life and mission.

• PRAYER REQUEST: Please pray also for the Middle East and North Africa Union (MENA), comprised of 20 countries, with over 500 million people. 95% of MENA is Muslim. The Adventist membership is 3,768, in 52 churches and 20 companies.

• PRAYER REQUEST: Pray for the cities that have no Adventist presence—that God will raise up laborers for the harvest. There are 52 cities of 1 million or more people in this territory, some of which have never had a Seventh-day Adventist set foot in them.

• PRAYER REQUEST: Please pray for the current tent-makers working in MENA, that God will strengthen them for their task.