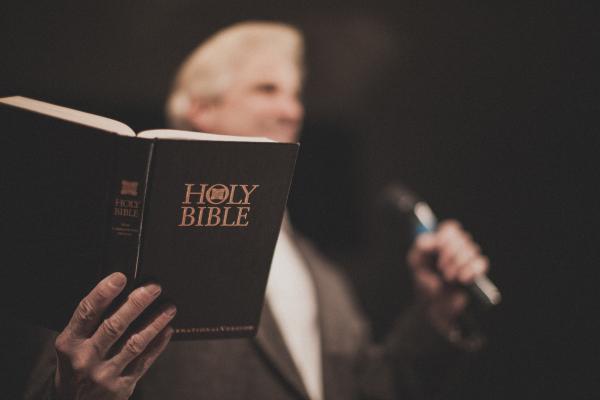 A young shoe salesman from Chicago had little education, but upon hearing the good news of salvation, he couldn’t keep it to himself. With great eagerness he went to work sharing the love of Jesus with anyone that would listen. With no place to preach, he began gathering boys off the street and took them to a beach on Lake Michigan where he taught them his own Bible class.

Eventually he was led to become an evangelist and began speaking to large audiences across America and the British Isles. Described by people as a “dynamo of feverish activity,” he appeared to be making an impact. Yet inside, he felt something was lacking. However, shrugging the thoughts away, he kept preaching.

A few years into his ministry, he was holding some evangelistic meetings in Chicago, when two godly older women began attending his services. As a result, a deep burden came over these women for this young evangelist. Taking it upon themselves to pray, they began pleading with the Lord to baptize the young preacher with Holy Spirit power. Not long after, they approached him. “We are praying for you!” they told him. He smiled and replied, “Why don’t you pray for the people?”

Their answer startled him. “Because you need power!”

“I need power?” he thought to himself? “I thought I had power.” At the time he was teaching at one of the largest congregations in Chicago. There were some conversions, and he felt satisfied. However, their statement deeply troubled him.

The two older women continued praying and not long after, the young evangelist invited them to his study. Right then and there, they all got down on their knees and the two women began pleading that God would send the Holy Spirit in fullness. As they prayed, the young evangelist recognized his need as a great hunger for more of the Holy Spirit filled his heart. “I really felt [at that moment] that I did not want to live any longer if I could not have God’s full power for service,” he later shared.

While nothing significant happened that day, the young man continued to plead for a deeper filling of the Holy Spirit. Time went on, and then one day he had an experience, which was so sacred that he could not speak of it for some time. “I can only say,” he said in later years, “that God revealed Himself to me, and I had such an experience of His love that I had to ask Him to stay His hand.”

The next time he went to preach, while the sermons were not different, the preacher was. “I did not present any new truths, and yet hundreds were converted,” he reported. As God’s Holy Spirit outpouring continued to flood his life and ministry, thousands flocked to hear his messages. Soon he was one of the most sought after evangelists of his time.

Looking back, Dwight L. Moody often remembered with fondness the day the two older women first came to pray for him. While there was no sound of a mighty rushing wind in his study that day, he believed that this day was the turning point in his ministry—the day that he recognized his great spiritual need for the fullness of the Holy Spirit. His ministry went on to last for forty years and effectively reached tens of thousands for Jesus.

Moody’s testimony reminds me of a statement from Ellen White. She writes, “Will we wrestle with God in prayer? Will we receive the baptism of the Holy Spirit? This is what we need and may have at this time” (Prayer, p. 87). In another place she writes, “In giving the Holy Spirit, it was impossible for God to give more. To this gift nothing could be added. By it all needs are supplied” (Signs of the Times, August 7, 1901).

I believe this gift is what is most lacking today in our lives and ministries. And yet, it is this gift alone that will empower us to finish God’s work. If this is the gift God has freely given, why don’t we seek it with all our hearts right now?

Melody Mason is coordinator for United in Prayer for the General Conference. She’s also the author of Daring to Ask for More: Divine Keys to Answered Prayer as well as Daring to Live by Every Word: Loving God with Heart, Body, Mind, and Soul.