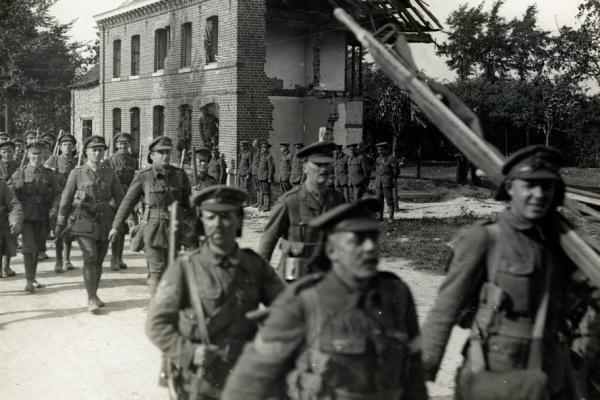 My grandfather, Franz Hasel, was an ordained Seventh-day Adventist minister in Germany. Against his will, he was drafted into the army during World War II. Because my grandfather wanted to honor God’s commandments, including “thou shalt not kill,” he requested to serve in the medical corps and refused to use a weapon. But his request was not granted. Instead, he was placed into another unit as a unit clerk on the front lines. However, he took his conviction not to kill so seriously that he carried a wooden gun in his holster for the duration of the war. Although he thought he might die many times, God miraculously protected my grandfather time and time again. His inspiring story can be read in the book A Thousand Shall Fall.

My grandfather often told us a story that is not included in A Thousand Shall Fall. While serving in Russia, far from home, his unit was assigned to search through the houses of every village that the Germans had captured on their advance into Russia. They were ordered to search for resistance fighters, who would hide inside homes and attack the advancing German troops. They were told to immediately and indiscriminately shoot every person they found hiding.

One day, as my grandfather was carefully searching a house, he had a feeling that something was unusual. When he entered a particular room, he found it empty, but still had an impression that something was suspicious. When he looked under the bed, he saw a young man staring right at him. My grandfather knew that if he exposed this young man, he would definitely be shot. They locked eyes for a split second that seemed like an eternity. Then my grandfather got up, left the room, and did not report what he had seen. He had pity on this young man and spared his life.

Several weeks later, my grandfather was assigned to patrol an important railway track. His duty was to make sure that no resistance fighters bombed the tracks. He was watching alone when a group of Russian Cossacks rapidly charged at him on their horses. There was no way to escape. He braced himself for death, believing they would surely kill him.

The group quickly encircled him, but my grandfather was shocked when he saw the face of their leading commander. It was the same young man he had seen hiding under the bed in that house. They immediately recognized each other. The young Cossack commander pointed his gun at my grandfather and signaled to him, “I could kill you now,” he indicated, “but you were kind enough to save my life. So, I will spare your life!” Then he ordered his men to ride on. In God’s providence, the life of my grandfather was once again spared. His loving-kindness to that man and his faithfulness to God was returned to him. I’m so thankful for the virtuous life and the example of faithfulness and loving-kindness my grandfather left behind. This legacy can be ours as well.

In the Old Testament, we read the story of Daniel, who was thrown into the lions’ den because he was not willing to compromise his faith in God. When Daniel distinguished himself as a wise, dependable leader for the king, his enemies became envious and looked for ways to accuse him of wrongdoing. “But they could find no ground of accusation or evidence of corruption, inasmuch as he was faithful” (Daniel 6:4, NASB). My hope is that our enemies (if we have any) and our friends, and all those who have been watching our lives in the midst of this COVID-19 crisis, will discover the same about us! May we be people who are known for the genuine loving-kindness we gently extend to others and may we be respected for our faithfulness in the daily things we do. And like Daniel, may we trust God to take care of us as we are faithful to His will. No matter what the future holds, let us be men and women who are kind to each other and who are faithful to God and His Word.

Frank M. Hasel, PhD, is a theologian and associate director of the Biblical Research Institute at the General Conference of Seventh-day Adventists. Frank is also a best-selling author and the co-author of the current Sabbath School Quarterly ‘How to Interpret Scripture’. The story shared in this week’s devotional can be found in his most recent book Living for God: Reclaiming the Joy of Christian Virtue.

ACTIVE HEART CHALLENGE: It can be easy to publicly profess faithfulness to God in words and songs. However, it is often in the small things of life ­– when nobody is looking, or nobody you know is looking – that the genuineness of one’s faithfulness is put to the test. Ask God to help you see areas in your life that need to be worked on. Pray for Jesus to live out His life within you, and for the strength to choose the option of faithfulness when temptation calls.

“It is not a conclusive evidence that a man is a Christian because he manifests spiritual ecstasy under extraordinary circumstances. Holiness is not rapture: it is an entire surrender of the will to God; it is living by every word that proceeds from the mouth of God; it is doing the will of our heavenly Father; it is trusting God in trial, in darkness as well as in the light; it is walking by faith and not by sight; it is relying on God with unquestioning confidence, and resting in His love.” – Acts of the Apostles, p. 51