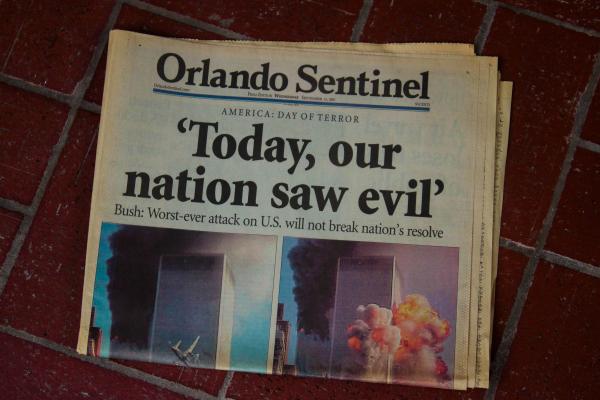 For John Mahony, a retired U.S. Army colonel who was managing projects for Blue Cross/Blue Shield, instinct came before analysis as he fought to stay on his feet the morning of Sept. 11, 2001.

"The building jerked hard, throwing everyone off balance," remembers Mahony in the account he has written of surviving the 9/11 attacks.

Mahony was working on the 19th floor of the North Tower of the World Trade Center that morning when the planes hit the building.

"My support was gone, and I had to catch my balance to remain on my feet."

Mahony had lived in California. "Earthquake," he thought, even as his military training diagnosed "bomb." Mahony directed his co-workers to a stairway, checked the area for anyone else, and headed down through what was quickly a haze of smoke and dust. This was when his daily habit of saying the Lord's Prayer bobbed to the surface of his mind, providing a grillwork of stability in the midst of the writhing building.

"As I stepped into that smoky stairway, the Lord's Prayer ran through my mind; over and over and over: 'Thy will be done.' At first, I could only get through part of the prayer. But after a few floors, prayer relaxed me and I was able to say it completely."

On what will always be the worst day of his life, Mahony also saw great generosity and courage around him.

"For everyone who was having a hard time with hysterics, there were three or four who went out of their way to offer an arm, an encouraging word or a prayer."

Mahony has found that most people who ask him about that day keep wanting to find out about the tragedy, the chaos of it all. But his most enduring memory comes from the other side of that day.

With hundreds of others, Mahony and his office mates trudged downstairs through the smoky air, grateful that the lights and ventilation remained on. When the fire sprinklers came on, they grabbed the handrails to keep from being swept off their feet from the waterfalls that ran down the steps.

Firefighters, breathing hard, passed them going up. But out of the chaos, to the rhythm of the Lord's Prayer, Mahony sensed something that reminded him of when his mother would wrap him up as he'd climb out of a cold swimming pool, and he would be held, safe and warm, in loving arms.

"As I walked down that stair, somewhere between the 12th floor and the 10th, somewhere between 'Our Father' and 'Thy will be done,' that same feeling came over me. Suddenly, I was wrapped in warmth, and love, and comfort. In that smoky, wet stairway, in a burning building, surrounded by a thousand frightened people; I felt wonder. I felt God's peace, and I knew that regardless of the physical outcome, everything would be all right."

• Pray for those battling wildfires across the United States. Pray for those who have already lost homes and property. California is being hit especially hard with record high temperatures and dry conditions which is sparking a high number of fires.

• Pray for this week’s Adventist Mission unreached people group, the people of Iran. Iran is a multiethnic country with a rich history. The people are very warm and hospitable. Only 1.6% of the population are Christian, so join us in praying that the nearly 84 million people in Iran have an opportunity to know Jesus as their Savior. May God send the Holy Spirit to touch lives in Iran.

• Pray for God’s peace and love to be seen clearly in the midst of widespread political unrest across the United States. Pray for Christians to courageously share the hope and faith that we have in Christ.