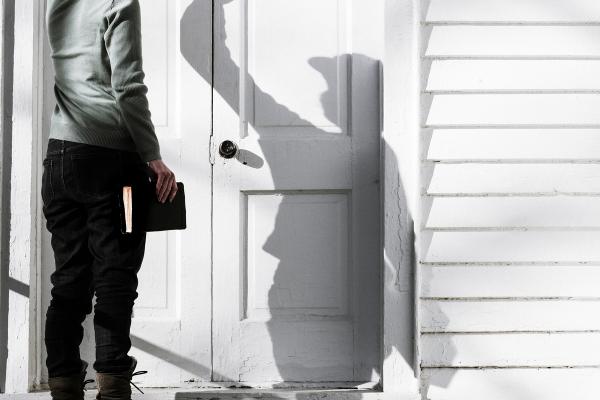 Helen Johnston abruptly realized as she walked down a street in Battle Creek, in the U.S. state of Michigan, that she had not prayed. So the student literature evangelist paused to seek God’s guidance. It was summer 2015, and she was raising money for school.

As Helen headed to the next door, she heard a voice say, “A man will open the door, and he needs ‘The Great Controversy.’”

Moments later, the house door opened. A man stood there.

Helen, following the practice of seeking to make friends first, offered a health book. Then she pulled out a copy of Ellen G. White’s “The Great Controversy.”

The man was intrigued by the book. He wanted his own copy, but he couldn’t afford it.

Helen felt certain that God wanted him to have the book, so she offered it for free. The man shook his head. Helen asked whether he had any spare change lying around the house. The man came back with a handful of coins, but it was still not enough. He gave Helen the money but still refused to take the book.

Disappointed, Helen turned to leave. She took a few steps and tripped. The coins scattered on the ground.

Helen quickly asked the man to hold the book. After collecting the coins, she began to walk away.

The man called out after her. “Your book,” he said. “You forgot your book.”

Helen looked back and smiled. “It’s yours to keep,” she said.

He returned her smile. “You win,” he said.

An hour later, Helen found herself going door to door in a more affluent neighborhood. As she introduced herself and was about to say her name, the woman at the door interrupted her. “It’s Helen, right?” she said.

Helen was startled. She had never seen the woman before.

“I am a Seventh-day Adventist,” the woman said. “This morning as I was reading my Bible I was impressed by God that Helen would come to my door. I was also impressed that I needed to write a check for $20 because Helen would meet a man who needs ‘The Great Controversy’ but would not have the money to buy it.”

The woman pulled out a signed check made out to the sum of $20. She only needed to add the name of the recipient. “Who do I make this check out to?” she said.

Kamil Metz is international coordinator for the GLOW tracts ministry. This testimony was originally published online at Adventist Mission. Click here to view the original article.

• PRAISE REPORT: God really blessed the General Conference “Week of Prayer.” In fact, the messages were so convicting and inspiring that we plan to share them soon so more people can be blessed! (Stay tuned for details!)

• PRAISE REPORT: The new Revival and Reformation website has finally launched. Thank you so much for your prayers! Please pray now that many people will be encouraged and drawn closer in their walk with God through this website and the resources we share. (To check out the new resources, click here. Dozens more resources to be added in the coming days!)

• PRAISE REPORT: God blessed thousands of young people around the world as they took part in Global Youth day last Sabbath! Many exciting testimonies. Thank you for your prayers! Keep praying for our youth to desire to serve Jesus, not just on Global Youth Day, but on every day.

• PRAYER REQUEST: Please keep praying that many churches will be inspired to take part in the day of prayer and fasting this coming Sabbath, April 1st. (For program materials, click here.)

• PRAYER REQUEST: In the current refugee crisis, many refugees have found temporary shelter in existing cities rather than refugee camps. And the camps that do exist are said to be the cities of tomorrow. Please pray for the people in these cities and camps to have their physical needs met and to have opportunity to learn of Jesus!

• PRAYER REQUEST: In the West-Central Africa Division, in the city of Monrovia, Liberia, there is a new center of influence called the “Millennium Guest House. It aims to reach the higher levels of society with stop-smoking programs as well as programs specifically for children, women, and men. Please pray that God will bless the work of this center, and bring to it the people whose hearts He is preparing.