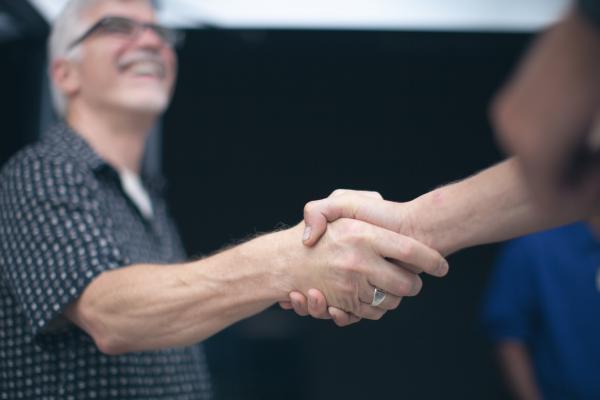 Meet Them Where They Are!

Simo Vehkavuori, a retired pastor, sensed an inner voice inviting him to keep on walking after he arrived at a lake crowded with sunbathers and swimmers in Finland. Simo followed a path past several smaller lakes. “Go farther,” the inner voice said. Simo reached a small lake and saw four young people seated on the ground. “Would you like to hear a story from the Finnish Civil War a hundred years ago?” he asked.

When Simo finished the story, he said, “Excuse me, but do you mind if I ask you how you feel about religion?”

“We believe in God,” they said.

“Would you like to hear how I became a Christian?” he asked.

When he finished, he mentioned that he had several cards for online Bible studies. The young people were interested, and Simo found he had exactly four cards in his pocket. “Wow!” a young woman exclaimed. “The Lord knew that there were four of us. That is why you had four cards with you!”

At another lake, Simo approached a young woman who was sunbathing. “Would you be like to hear a story from the Finnish Civil War?” he asked.

After the story, he asked how she felt about religion and told how he had become a Christian. Seeing that she was interested, he said, “I have a book called Steps to Christ at home. Would you mind waiting 20 minutes?”

She agreed. When he returned with the book and a Bible study card, she said, “When you left, I started timing you on my watch. It took you only 15 minutes.” She gratefully accepted the gifts.

Another time, Simo went up to a married couple with their teen son. “Would you be like to hear a story from the Finnish Civil War?” he asked. Afterward, when he asked how they felt about religion, the parents replied that they had a major problem at home. Their son was using drugs. “We need to pray together,” Simo said. The woman began to cry. After praying, Simo said, “I would like to share with you a book, but it is at my home.”

“We can go in our car,” the man said. At his home, Simo gave the grateful couple Steps to Christ and a Bible study card.

Simo believes God is blessing his efforts to meet people in secular Finland. No one has ever refused his offer to tell how he became a Christian. His mission outreach, he said, is inspired by the example of Paul. “I am convinced that we should go out to meet people and not wait for them to come to us,” he said.