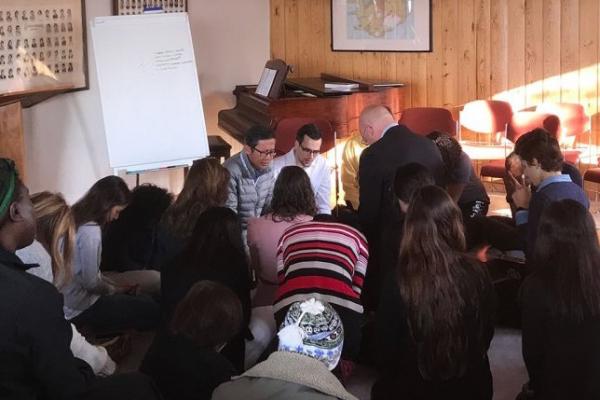 For decades, mission has been viewed as a largely human endeavor with three simple ingredients: come up with a plan, enter a target country, and then execute the plan. But what would mission look like as a primarily divine endeavor? What would it look like to do something so simple and yet so full of faith and trust in God that it seems radical and insane?

This is exactly what the Generation. Youth. Christ’s (GYC) mission to Iceland this August was all about. The Iceland trip was conceived two years ago as a crazy idea among those of us on the GYC Executive Committee. We had all seen people reach small towns and even cities through literature programs and public evangelism. Still, we asked the question: if we could do anything for God, what might we attempt to do? A town or city seemed like an achievable goal. But why not try to reach a whole country? As we discussed the idea, Iceland stood out as a country that could conceivably be reached by a group of 50-100 people.

As the planning began to take shape, I didn’t like the idea at all. Iceland is sometimes associated with a secular, humanistic culture and has a very small Adventist presence. In my mind, it made more business sense, as far as success was concerned, to select a country that would be more receptive and open—or at least have a strong Adventist presence that could provide plenty of enthusiastic support. Attempting to reach the country of Iceland felt like a setup for failure.

Despite my reservations, planning went ahead! We decided that approaching this mission trip with a traditional goal of distributing flyers and conducting public evangelism might not be the most effective use of our time and energy. We weren’t sure what we would do. After all, the people of Iceland don’t appear to have many needs – the standard of living is high and services like healthcare are freely available.

This is when I believe God struck us with a simple, yet profound idea. We would just go to pray. Person by person, street by street, town by town.

The mission trip was now only a few months away and those of us who were going needed to organize flights. The difficult process of applying for a Schengen visa was not encouraging. As a South African citizen, this required a lot of work. When I discovered that the consulate I needed to go to for the visa interview was completely booked out, I was a little relieved, yet conflicted. With some reluctance and a sense of obligation, I prayed that God would make an opening for me if He saw fit. Actually, I told Him I would only go if an appointment became available within the next three days.

First day: nothing. Second day: nothing. Third day: nothing. Phew! What a relief. And then, right before I went to bed that night, God impressed me to check one last time. With even greater reluctance than before, I pulled up the page for the consulate and there it was: a dreaded green availability slot… for the very next business day.

I wasn’t thrilled, but I knew that since God had clearly set me up here there was no point following in Jonah’s footsteps.. I planned for the best and God began the miracles!

The day finally arrived for the mission trip.. No sooner had we landed in Iceland, than we discovered we were over capacity for the building our team was supposed to stay in. As quickly as the problem arose, it was resolved. A large group of people who had made a reservation long before had failed to show up and a second building on the campus we were staying was available. From our perspective, God literally caused an entire group of people to not show up just so we could use the needed space for our missionaries. Wow! With God working overtime so soon into the mission trip, I was really glad I hadn’t stayed behind.

Over the next few days, there were numerous difficult circumstances that God resolved for us in direct answer to prayer. Each day, we came together in the morning and evening for up to an hour of united prayer. Through these times, God drew us together in a way we had never experienced before. But the power of prayer became especially apparent to all of us as we began to go out into the community. God gave us many divine appointments. [More of these testimonies will be shared in next week’s “United in Prayer.”]

In summary, by the time the 10 days were finished, 150,000 glow tracts had been distributed and our group of nearly 50 had reached over half the population of the country of Iceland. With few exceptions, nearly every home, apartment, and person in Reykjavik and the surrounding cities were offered prayer personally or received a glow tract if they were not home. We encircled every area we walked in prayer, pleading for God to bring revival and Christian growth to Iceland, and we know the best is yet to come.

What does success look like when you go to do something as utterly radical as praying for a country person by person, street by street, town by town, no strings attached? What does it look like when you literally leave the results with God? For Iceland, only time and the progression of history’s story will tell, but for those of us who went, life will never be the same again.

We are thankful to the Iceland Conference of Seventh-day Adventists and the Trans-European Division for dedicating their personal and financial support throughout this trip. Please keep them in prayer as they continue the work in Iceland. We know God has incredible things in store!

• PRAYER REQUEST: Please continue to pray for those who are dealing with horrific loss in the wake of the recent and ongoing hurricanes. Pray for food, water, and rescue support to reach those who are stranded. Pray for comfort for those who have lost family or loved ones.

• PRAYER REQUEST: Pray for the country of Iceland, that God would pour out His Holy Spirit on the church there and that many would respond to the prayers, and to the seeds recently planted.

• PRAYER REQUEST: Please pray for the upcoming Day of Prayer and Fasting scheduled for this coming October 5, 2019. The theme is “World-Changing Prayer Warriors: Prayers that Change Us.” Pray that many will be blessed by this special day! (For more information, visit: https://www.revivalandreformation.org/resources/all/prayer-and-fasting-days)

• PRAYER REQUEST: Please pray for the Annual Council meetings that will occur in early October. This is when church leaders from all over the world gather together in Silver Spring, Maryland to discuss important issues and make decisions for the future of the Church.

• PRAYER REQUEST: Please pray for wisdom for our church leaders, for a spirit of humility and prayer to saturate the meetings, and for the Holy Spirit to lead each discussion and each decision made.