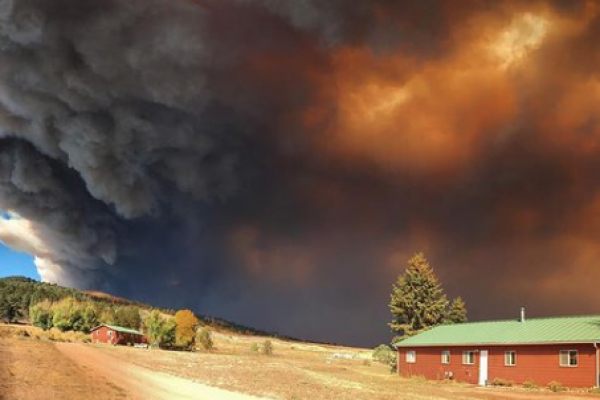 Miracle Deliverance from the Fire!

On a sunny Sabbath afternoon in August 2020, my wife and I joined another church family for a sixty-mile drive into the pristine Rocky Mountain wilderness. After a wholesome picnic, we wandered into the woods and happened upon the most majestic, the most rewarding Sabbath blessing imaginable. Several moose were quietly harvesting lunch for themselves out of nearby swamps.

What a thrill, such a rare privilege. A week later, the beautiful memory turned to one of dread. On August 13, local newscasts announced that lightning had sparked a forest fire in the vicinity of our outing. Did we need another destructive event? What of the wildlife, God’s innocent creatures? How would they fare?

Within two months, the Cameron Peak fire grew to be the largest fire in Colorado’s recorded history, and in the middle of October, it was on a collision course with Eden Valley Institute where we live and work.

For several weeks, we were tormented by excessive amounts of smoke. Then one day we woke up to an ominous sky—a bank of black smoke tinged with a red glow hovered over us like a huge mountain threatening apocalyptic cataclysm. (See picture above taken by Newstart Lifestyle director Chelsea Carena.)

Everyone said the Lord would not allow anything to happen to His own ministry. After all, He had protected Eden Valley from a similar fate twenty years earlier. That was true then, but what about now? Under that cloud of uncertainty and because of mandatory evacuation orders, we all had to leave campus. All that is, except for Ignacio Perez, our intrepid farmer. We all thought he should evacuate too, but he didn’t think so. “Someone needs to guard the premises,” he said.

Good thing, too; the very first day he sent away four cars of people. We don’t know what exactly they had in mind, but Ignacio helped them decide perhaps to do what they envisioned elsewhere.

A few days into our evacuation (we and many others received free motel stays thanks to American Red Cross), we received word from Ignacio that the high flames were now a mere 2,500 feet away from the nearest house—his own. The fires were now surrounding Eden Valley on all but one side. Were we about to lose our precious property and beautiful mountain of pines? Or would God yet intervene?

Needless to say, our prayers intensified accordingly. We also realized that it isn’t easy to suppress a prairie fire fanned by strong winds. (The north side of Eden Valley borders a large field of wild grass.) Nothing but a miracle would save that side of the institution. Providentially, the first responders, 15-20 fire trucks, and a water-dumping helicopter were nearby to save the day.

Then, miracle of miracles, in the middle of a long drought and the relentless fire, the Lord sent an unpredicted foot of snow on Eden Valley Institute and more than two feet in the mountains.

I’m reminded of the promise, “In every difficulty, He [God] has His way prepared to bring relief. Our heavenly Father has a thousand ways to provide for us, of which we know nothing. Those who accept the one principle of making the service and honor of God supreme will find perplexities vanish, and a plain path before their feet” (Desire of Ages, p. 330).

Though the fires are not fully quenched, they no longer pose a threat to our campus, and we praise the Lord for another miracle deliverance. No buildings were harmed, and God even spared our beautiful mountain of pines above campus. He is good.

“For the eyes of the LORD are on the righteous, And His ears are open to their prayers;

Frank Fournier and his wife Janet live in Loveland, Colorado, where he serves as pastor for the Eden Valley Institute. Eden Valley Institute is often sought out for it’s two-week lifestyle program for those struggling with various health challenges. The institute also offers a Medical Evangelism training program. Frank is author of this week’s featured resource, the inspiring book: “From Pigpen to Salvation: Lessons from the Parable of the Prodigal Son.”

• Pray for those across the Western United States that are still putting their life back together after this summer’s fire onslaught. Pray for those still struggling with ongoing fires!

• Pray that a new fire would sweep our entire world, the fire of the Holy Spirit, as people turn back to God in confession and repentance.

• Pray for pastors and church leaders to know how to lead their flocks in the midst of COVID lockdowns. Pray that God’s people would continue to encourage one another in the faith.

• Pray for this week’s Adventist Mission unreached people group, the 137 million Shaikh in Bangladesh. Pray they would come to know the glory of God in the face of Jesus Christ. There are virtually no believers of Jesus in this huge people group. May the Holy Spirit work mighty miracles among the Shaikh as we join together in prayer. “For the earth will be filled with the knowledge of the glory of the Lord, as the waters cover the sea." (Habakkuk 2:14)