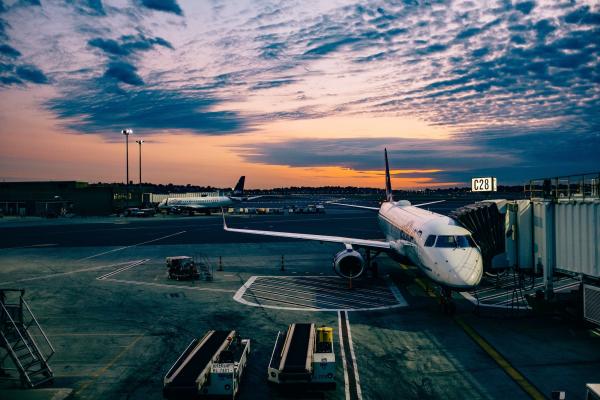 It was Friday and I was grateful as the plane landed at the Washington-Dulles International Airport in Virginia, U.S.A., after visiting a division. I looked forward to the Sabbath at home and some much needed rest.

As the plane taxied to the gate the flight attendant announced, “The airport is experiencing a computer failure in immigration and everyone is to stay on the plane until it is resolved.” I sighed and leaned back, praying that it wouldn’t be too long.

One hour passed. Two hours passed. Now I was praying earnestly. The 300-plus passengers on my flight were getting irritable. “What is taking so long?” they repeatedly asked the flight attendants. Always the same answer—“They are working on it.”

Many more planes had landed from outside the United States while we were waiting. The number of passengers to go through immigration was growing. It was obvious I wasn’t getting home any time soon without a miracle.

The flight attendants started passing out more drinks to the impatient passengers. My leg started cramping and I needed to walk around. I decided to get out of my seat and do my best to stretch my legs in the narrow airline aisles. Up and down I went until finally my limited pathway brought me to the front of the plane and the open door. I took a moment to peek my head out the door and looked around the causeway. The flight attendant standing guard asked, “Where is your seat?”

I told him my seat number. “Do you have luggage?” he asked. “Yes,” I answered.

“Two. Both black. A carry-on and a computer bag,” I responded.

“Wait here.” And he disappeared. Soon he reappeared with my bags. Handing them to me, he said, “Now, run!” And I did!

I went up the passageway. As I emerged, a woman met me. “Follow me,” she said. I obeyed.

Another young airline employee met me. “Follow him,” instructed the woman. And I did.

He wove quickly in and out through the people. I kept close to him as we maneuvered through the large crowd. He brought me directly to a Global Entry Kiosk. I scanned my passport, checked through the items, and was on my way! A full escape! I marveled at what God had just done in answer to my prayers.

Recently someone asked me my most memorable event of 2019. This experience immediately came to mind. I relayed the story to those gathered around. “Just think,” I said. “Not one, not two, but three airline employees!” My listeners also marveled at this intervention. Then one individual said, “Just like Peter’s release from prison. Those were angels.” I saw nods around the table.

At first I shook my head, “No, not angels.” But as I reflect more, I recall very clearly that all of them were actually expecting me to show up. They were not at all surprised to see me, a lone traveler who was supposed to be confined to the airplane! Maybe they were just helpful. Perhaps they were angels. Either way, one thing is clear: God was watching out for this weary traveler who made it home in time for Sabbath, for some much needed rest, and with a feeling of being very blessed.

My amazing escape reminds me of the miraculous escape of humans from the certainty of death because of Jesus’ incarnation. He condescended to this sinful world, was born as a babe, lived like a man, died like a criminal, resurrected to minister in the heavenly sanctuary, and soon will return to exterminate sin forever. His is the greatest escape story ever told! Hallelujah!

G.T. Ng is the executive secretary of the General Conference of Seventh-day Adventist.

• PRAYER REQUEST: Ten Days of Prayer, which runs January 8-18, 2020, is in full swing now. Keeping praying that we each will come to understand more deeply what it means to seek the Holy Spirit. It’s not too late to be part of this special life-changing Ten Days of Prayer! To learn more, visit tendaysofprayer.org

• PRAYER REQUEST: We are about six months away from the next General Conference Session in Indianapolis. We invite you to start praying with us that God will work in a special way during this session, and that the Holy Spirit will be poured out as never before.

• PRAYER REQUEST: Pray for Sherry Clemmer, event coordinator, and the General Conference team as they plan for the 2020 General Conference session. There are still so many logistical details to work out. Pray for God to lead in the planning of each detail.

• PRAYER REQUEST: Pray for the Indianapolis Dome and Convention Center staff that we will interact with at the upcoming General Conference Session. Pray that we will be positive witnesses and that they will desire to give their lives to Christ and become part of this end-time movement.

• PRAYER REQUEST: Continue to pray for the Centers of Influence in your region of the world. There are many. Perhaps you have one in your own community!

• PRAYER REQUEST: Please pray for countries throughout Asia and the Middle East that are experiencing great religious persecution. Pray that believers will be faithful and stand true to God’s Word. Pray that God will send more laborers into these fields.