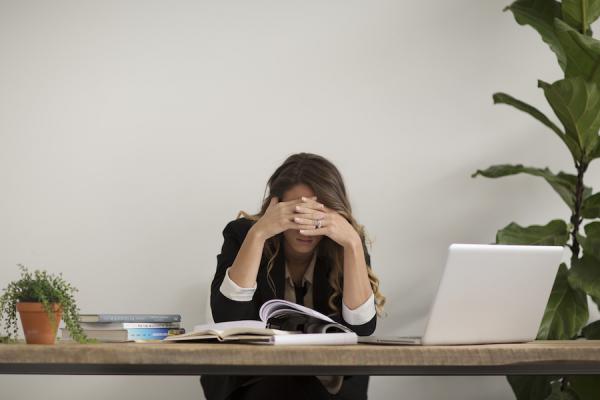 Praise the Lord for Migraines

I am the only Adventist in my family. I was brought up Catholic, and my mother, sister, and her family are very involved in their faith. Conversations can sometimes be tense when we come to spiritual matters and differences in beliefs. However, I continue to pray for my family and for God to open doors for me to share. Recently He has opened some very unusual doors.

As someone who has suffered from migraines since age 11, I never thought I would praise God when my sister got a migraine several weeks ago. Yet, that is what I did. It was the last day of staff development at the parochial school where my sister teaches. She got a sudden migraine early in the afternoon and instead of pushing through, like she generally does, she decided to go home to rest.

When Joanne got home, she found our mom a bit disoriented. Thinking she was just waking up from her own nap, Joanne took the dogs out and did a couple of things before going to talk with Mom. It was at that point that she realized there was something really wrong. Our mom who has Multiple Sclerosis was very confused and out of it. After a brief conversation, Joanne knew that she needed to quickly get her to the hospital and called for an ambulance.

Within a few minutes, help arrived and our mom was loaded into the ambulance. Praise God my sister had no clue of the gravity of the situation! I received a phone call telling me that something was wrong, but my sister wasn’t sure what it was…just that they were taking Mom and using lights and sirens. What the paramedics did not tell her was that Mom’s heart rate was 33 beats per minute and dropping. They transported her to the nearest trauma center and upon arrival her heart rate had dropped to 25. Although unaware of her serious condition, I asked multiple friends and prayer partners to pray.

Meanwhile, things continued to deteriorate with my mom. Not long after arriving at the hospital, she started to lose consciousness, and stopped breathing. The doctors rushed her to surgery and installed a temporary pacemaker, then transported her to the main hospital Cardiac ICU, where she stayed for five days. By the time we knew what was going on, it was too late for me to make the 6-hour drive alone. However, God knew what I needed when a dear friend, who lives 3 hours away from me, offered to come get me and take me to be with my family. What a blessing to have such friends!

As I sat in the Cardiac ICU with my sister and niece, we were able to talk about what God had done…how He saw Mom’s heart was failing, and used a sudden migraine to get my sister home. My niece asked permission to ask me about my faith, and wanted to know one of the biggest differences. I chose to talk about death, and we were able to have a wonderful conversation about the state of the dead. She was happy to know that we do not go right to heaven, hell or purgatory—a mythical holding place where the souls of those who die are made ready for heaven—but that we all sleep until Jesus comes again.

Thankfully, due to much prayer and the help of medical professionals, my mom is doing much better and has returned home. Praise the Lord that we have her with us awhile longer. We were told that had my sister waited until her normal time to come home, she would have found our mom lifeless. So I praise the Lord for answered prayer…and I also praise Him for migraines!

• PRAYER REQUEST: Pray for Christchurch, New Zealand, and for the continued healing and interfaith connections in that community in the aftermath of the March 15 attack on a mosque. Although it’s been several months, the pain is still real. Pray for our church members to know how to minister and reach out to the Muslim community.

• PRAYER REQUEST: Pray for those still seeking to put their life back together in Mozambique, Malawi, South Africa, and Zimbabwe after Cyclone Idai came through this past spring.

• PRAYER REQUEST: Please uplift the staff and students at Mozambique Adventist University in Beira. Pray that God would supply their needs, and that they would continue to train many workers for the Kingdom.

• PRAYER REQUEST: Pray for those in Paradise, California, still recovering from the horrible fire that swept through the region last fall. Pray that the believers in this community will be strong to comfort others through this crisis.

• PRAYER REQUEST: There are many disasters and tragedies around the world that we fail to mention. Pray for those parts of the world that God has especially laid on your heart.

• PRAYER REQUEST: Please pray for church members in Japan who are making plans for outreach at the 2020 Tokyo Olympics. Pray that God would even now prepare the hearts of those competing in and attending the games, that they would discover that God has called us to run an even more significant race—not for a gold medal but for an eternal reward.